Cienté lights up the sky in aid of Pepper Foundation

On Guy Fawkes Night the Diamond Ball raised £10,000 for charity and ended with the skies above the Chilterns being lit up by the most spectacular fireworks display sponsored by the area's leading hairdressing salon, Cienté. 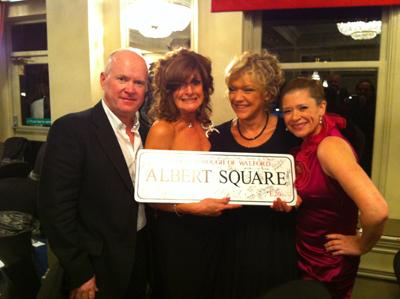 The sparkling Diamond Ball was held in aid of the Pepper Foundation, a Hertfordshire and Buckinghamshire charity that does excellent and valuable work caring for sick children and offering support for their families. The charity provides funds for nurses to give professional nursing homecare for seriously ill children.

The setting for the event was the grand and historic Pendley Manor Hotel, near Tring, and Lorraine Oakley, charity fundraiser and event organiser, gave an opening address. Her tireless efforts ensured that the ball ran smoothly and was enjoyed by all.

The host for the event was the inimitable Barry Williams, twice voted 'Comedian of the Year', who entertained and delighted the packed ballroom with amusing stories and witty ad libs that had the guests shaking with laughter.

After a delicious starter of cauliflower and white truffle soup and a succulent main course of shoulder of lamb, Tony Hill, the Chairman of the Pepper Foundation, addressed the guests. He gave a moving speech about the charity's work and the important role it plays in providing succour to sick children and giving support for their families. He expressed his gratitude to the assembled company for attending the ball and paid tribute to the work of Lorraine Oakley and the invaluable support from Cienté, directed by Trisha Buller, as leading event sponsors.

After cheese and coffee, the guests gathered for what was without doubt the highlight of the evening; a breathtaking fireworks display which produced gasps of wonder and awe among the guests and was no doubt seen and enjoyed by people for miles around. The fireworks were generously sponsored by Cienté hairdressing, who were thrilled that the event was such a huge success. 'We are delighted to have been able to play a role in supporting the Diamond Ball with this fabulous firework display,' Trisha Buller, Cienté's director, enthused. 'Lorraine has done a magnificent job in organising the event and we are happy to help the Pepper Foundation which provides such excellent support for sick children and their families in the local area'.

When the dramatic pyrotechnic show had finally died down, the guests gathered for the main fundraising part of the evening - an auction in aid of the Pepper Foundation. Barry Williams proved a canny auctioneer as he teased the crowd to gain maximum revenue for the charity. The auction items were an eclectic mix including a week's luxury stay in Loch Lomond, the use of a villa in Portugal, the legendary street sign from Albert Square signed by the cast of Eastenders and tickets to the final of Big Brother. The auction was followed by a raffle, again with some amazing prizes to add to the fundraising pot.

The evening, which concluded with entertainment from Ella Henderson and live music by 2Tone, was a stunning success enjoyed by all who attended and raised vital funds for a local charity.