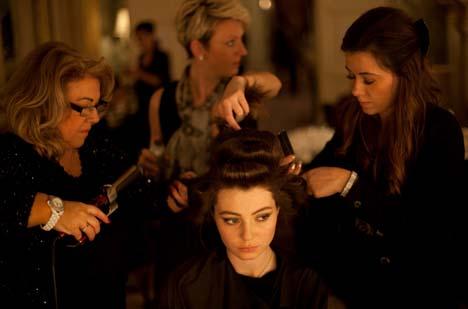 The Cienté stars were invited by top session stylist Karin Bigler to play a key backstage role at the glittering event at the world-famous Mayfair hotel.

The Nicholas Oakwell collection drew inspiration from the work of the great British jeweller, Andrew Grima, whose bespoke modernist pieces were the toast of the rich, the famous and the Royal Family in the Sixties and Seventies.

Metallics and exquisite beading sparkled as the models shimmied down the runway, but the eyes of the audience of fashion writers and celebrities were also drawn to the crystalline hues of citrines, emeralds and sapphires.

In the spirit of the decade in which Grima first came to prominence, the Cienté artistic team assisted with a range of Sixties-inspired hairstyles to complement Oakwell’s A-line dresses and other tributes to a time when the eyes of the world were on London.

“This was a fantastic opportunity to show our creative skills, while working to a tight and demanding brief,” said Cienté’s artistic director, Hayley Welling. “Being part of the Nicholas Oakwell backstage team was a really great experience.”